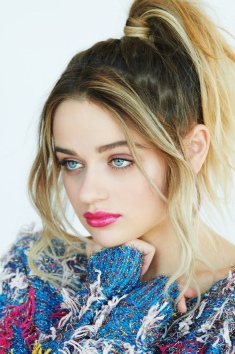 It was such a pleasure getting to chat with the beautiful, majorly talented, and down to earth Joey King! The groundbreaking actress and I talked about her incredible start to 2019, ‘The Kissing Booth 2,’ playing Gypsy Rose in ‘The Act,’ and everything else you’ve been dying to know.

I want to give the biggest thanks to Joey for being so kind and also her amazing team, Jillian and Brooke, at ID PR for being the sweetest and making this happen! Be sure to follow Joey on Twitter and Instagram and don’t miss out on anything this gem will be doing; you don’t want to miss out.

DL: Joey, thank you so much for taking the time to speak with me- I’m so excited! How are you?

JK: I’m fantastic. I’m on the floor of a bathroom right now petting a dog and doing this interview.

DL: You just celebrated your twentieth birthday, happy belated! Did you have a great time celebrating?

JK: I did!! I was working on set and the cast and crew made it so special for me. I ate my weight in cake…..and pizza…. and hot Cheetos.

DL: You’ve had a really incredible 2019 so far… what would you say your favorite part has been?

JK: Probably my Emmy nomination, I know call me crazy.

DL: I have to say, seeing your reaction to getting nominated for an Emmy was extremely emotional… it made me tear up! What was it like for you to find out that news?

JK: It was insanely emotional and exciting. I’ll never forget that moment Ken Jeong called my name on the livestream. Ill relive that moment forever.

DL: Your work on ‘The Act’ has been phenomenal, so the nomination is obviously extremely well deserved.

Was it hard gearing up for the role of Gypsy? I feel like it’s definitely one of your biggest projects and different from a lot of your other work that you’ve done over the years.

JK: It was definitely a challenge to gear up for playing Gypsy. There’s so many small intricate details that were so important to me. I was afraid, anxious, nervous…but that’s how it knew I made the right choice in playing this role, because it was a major obstacle.

DL: The story is so painful to even know it was real, what would you say your biggest challenge was on set or even while filming?

JK: My biggest challenge was probably being in the mind set if Gypsy and giving myself over 100%. It was emotionally draining.

DL: Working with Patricia Arquette was really awesome for you, was there anything she taught you as an actor or even inspired you in any way while you two were either hanging out on set or filming?

JK: Yes Patricia taught me so much and inspired me every day. She taught me on a non-actor level so much about just being a good human being and I’m so thankful. And as an actor she helped me tap into raw honesty emotions so well. I felt so supported by her and we trusted each other so much.

DL: Did you think the show would receive the reaction it has while you were filming, let alone get you the nomination?

JK: Absolutely not. I was just excited to be able to do something that challenged me. I had no idea it would’ve affected my life the way it has.

DL: One of the things I really admired that you did for the show was shaving your head. You could’ve easily worked with hair and makeup to do something to hide your hair but you didn’t.

What made you want to fully dive into the role so much and why do you think it gave you so much confidence like you said it did?

JK: This character….is not a character at all. Gypsy is a real person and telling her story as authentically as possible was very important to me. I feel lucky to have gotten to do something so drastic. I think it gave me confidence because I couldn’t hide from myself. I looked in the mirror every day and saw a raw version of myself, and I loved it.

DL: With the show wrapping a while back, you also have a few more projects that’ll be coming out this year and going into 2020… one of them being the sequel to the MAJORLY ICONIC, ‘The Kissing Booth 2.’

You can’t give too much info about the sequel, but is there anything you can spill the tea on?! I’m dying to know what my heart will feel during the second film.

JK: Everything you loved about the first film is the second one TIMES 10!!!  I’m really proud of what we’ve done. Those films will always have a special place in my heart.

DL: With you reading through the script and starting to film the sequel, would you say the first or second movies story line would be your favorite?

DL: Do you have any hopes for Elle and Noah?

JK: I have a lot of hopes, but you’ll just have to find outtttt.

DL: I think ‘The Kissing Booth’ is by far my favorite movie you’ve ever done, that and ‘Ramona and Beezus,’ when I was younger.

Have you had a favorite film that you’ve shot or one that you will hold closest to your heart more than others?

JK: I  was just talking about Ramona and Beezus the other day!! That movie will ALWAYS be one of my favorites that I’ve filmed. So much love and learning on that set. Oz The Great and Powerful and White House Down also gave me so many people that I still call close friends today.

DL: You’ve worked alongside a great deal of other big names in the industry since you were young, but is there anyone in particular that you also hope to work with one day? I would love to see you do something with our mutual friend, Jaime King… that would be amazing!

DL: With all that you’ve done throughout your career thus far, is there anything you hope to accomplish or do in the coming years?

JK: So much more I want to accomplish but for now I’m just living in the moment and appreciating the amazing time happening before me

DL: Thank you so much again for taking the time to do this with me and I will be rooting for you when the Emmy’s premiere next month!!