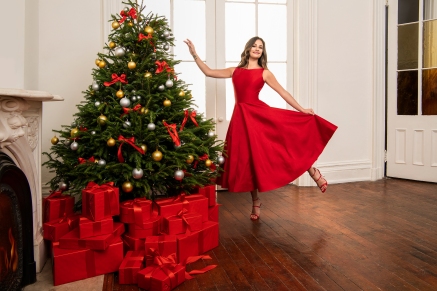 The new Queen of Christmas is here, so watch out!

Lea Michele is giving us a taste of the holiday season a bit earlier this year, but that’s quite alright. The thirty-three-year-old singer, actress, author, and… (shall I go on? She’s a legend, people!) shared her first song from her debut Christmas album, ‘Christmas In The City,’ with fans last Friday.

‘It’s the Most Wonderful Time of the Year‘ is the first song Lea shared with the world and reveled that the album will drop on October 25th! The eleven-track album features ten covers, and an original song that was written by Lea herself.

“It was always my dream to make a Christmas record,” Lea said to People Magazine in the surprise announcement. “Christmas is so special to me. It’s such an important time of year for me and my family that I have so many incredible memories from.”

She added, “That really became the jumping off point for this album, Christmas in The City, because I grew up in New York, and it’s such a beautiful time of year.”

Be sure to pre-order the album here + listen to the first song below!