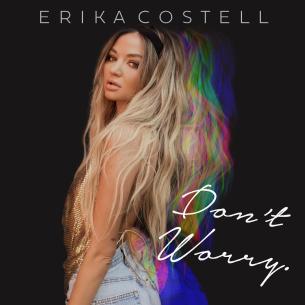 Erika Costell is giving fans a behind the scenes look at her life even more with her debut surprise EP, ‘Don’t Worry,’ which dropped at midnight. The singer, model, and YouTuber teased fans throughout the week with what they expected to be just a new single, but instead they got a five-track EP from the queen herself.

While Erika is at a completely different stage in her life now, she decided she wanted to share these songs with fans in hopes of someone somewhere to be able to relate to them. Speaking candidly on the release of the new material, Erika says “So many things in my life have changed since then, but putting my emotions into songs was personally one of the most powerful things I’ve ever done.”

Taking over the world has been easy for this gem to do, but she had a tough ending of last year while going through a public breakup with constant rumors and false stories that had no truth to them at all. That time in her life was hard, but she continues to keep quiet about everything and instead is continuing on the high road with it all and is letting her music speak for itself.

“This is the last time I will ever speak about that time in my life,” Erika says. She continued, “I’m so excited for the new era of music, and always remember that no matter how tough a situation you are in may seem; there is ALWAYS light at the end of the tunnel.”