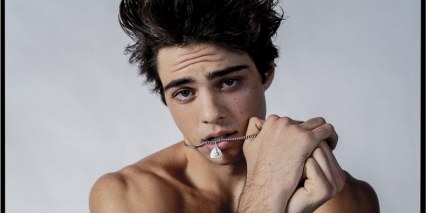 Talk about everything goals, am I right?! Lol!

Noah Centineo was one of the many featured in W Magazine‘s ‘Best Performance Portfolio‘ and chatted with the mag while serving looks; of course.

Speaking on being the “Internets boyfriend,” Noah opened up jokingly by saying “Not me. The characters I play are the dream. Oh, to differentiate the actor from the character!”

He also chatted about his first kiss… “On a hotel in Century City. I was staying there during pilot season, and there was a dance convention. I saw this girl named Mackenzie, and I asked her if she wanted to go to a movie with me. She said yes,” he said.

He continued about the experience- “It was Cowboys & Aliens. So the movie ends, we get up, leave the theater, and we’re holding hands. I walk her to her hotel room and say, ‘Good-night kiss?’ And we pecked. It was less than a millisecond. She closed the door, and that was that. I gave her my number, but I never saw her again. It was probably a terrible peck.”

Be sure to check out the rest of the magazines special issue here!