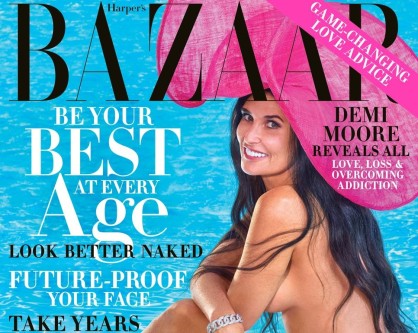 Demi Moore is gearing up for the release of her memoir, ‘Inside Out,’ which will be released September 24th, but that doesn’t mean the starlet isn’t already giving the world a deeper understanding of her world. The fifty-six-year-old spoke with Harper’s Bazaar for their October 2019 issue and got super candid ahead of the release of the book.

“Everything that occurs in our individual lives informs us. Shifting, molding, presenting the opportunities for the exact purpose to get us where we are in the present time, whatever that may be.” Demi says on the public’s perception on her past.

She continued, “All the projecting of who they think I am [were] the very things that were pushing me out of two elements: my comfort zone, and my control. They were trying to get me to let go and really be who I am and I don’t think that I knew how to do that.”

The Mother of three also spoke on her daughters; Rumer, Scout, and Tallulah. “My daughters offered me an opportunity to start to change the generational pattern. To be able to break the cycles …’ Motherhood, she says, was her only absolute goal and the only destiny she can be sure she’s fulfilled, and that includes ‘mothering myself.’”

Read more of Demi’s time with the magazine here!