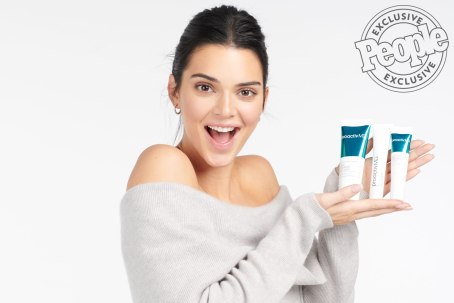 Kendall Jenner is now the new face of Proactiv! The 23-year-old model got candid in the first official advertisement with the company and wanted to let fans and the world know, that they aren’t alone.

“When I was 14, I couldn’t reach as many people that I can now that I’m 22. Now that I have this whole thing behind me, I can speak to so many people and be like, ‘I can help you and it’s okay,'” she said. She added, “I experience it. I’m very normal. I understand you. I can connect with you.”

Kendall was harassed to an extreme level when appearing at the Golden Globes last year while suffering with something that most of us can relate too, a breakout. It’s amazing to see that Kendall revealed this partnership with Proactiv the same night as the 2019 Golden Globes; a smack in the face to those who scrutinized her last year.

Charles Ressler, VP of creative, talked with People exclusively to share some behind the scenes stories from the beginning when reaching out to Kendall. We wanted Kendall to have that same experience before we even officially asked her to join our family. So Kendall used Proactiv for several months to ensure the product worked for her — surprises all around,” Charles told the mag.

“She was surprised that after trying everything under the sun Proactiv is the one thing that got her clear, and we were surprised by her willingness to share her story in such a vulnerable way. She really wants to help people heal from their acne, inside and out, and that’s our goal too, so this partnership just made sense,” continues Ressler. “We knew our campaign had to be a platform for Kendall to do just that. I’ve worked with and known many celebrities and I have never been so impressed as I am by the genuineness of Kendall — she’s a special person,” he concluded.

Be sure to check out the official advert below; you go Kenny!